Oliver Stewart begins Ace Septic Tank Service in Nashville, Tennessee. He used a 1940 Dodge pick up truck with a 500 gallon tank mounted in the back with vacuum drawn from the intake manifold of the truck engine.

Oliver Stewart sold Ace Septic Tank Service to his only son James Stewart. James purchased the company’s assets for $5000. The assets were a 1948 Dodge septic tank truck, a 1957 Ford septic tank truck, and trailer house. Mary Katherine, James’ wife, joined in the family business answering the telephone and scheduling service calls. Together, with hard work, Ace Septic Tank Service, prospered during the late sixties and into the seventies.

James Stewart’s son Jerry moved to Elizabethtown, Ohio and began Superior Sanitation Service. Equipment for the new company included a state of the art pumper vacuum truck from a new company in Stoney Creek Ontario, Canada. The truck was the first of its kind in the whole Cincinnati market. Jerry provided service for jobs that were too large for Ace Septic Tank Service.

Ace Septic Tank Service Company prospered for the next several years. On July 5, 1980 James Stewart’s old truck lost its brakes on one of the steepest hills in the area. The old truck, loaded full, could not stop. Not wanting to cause any injury to others, and that included several children playing in the area, James road it out. The truck finally went out of control in a clearing at the bottom of the hill and crashed. He never regained consciousness and died August 11, 1980.

Jerry Stewart chose to continue his father’s 31 year old family business rather than try to continue his own plumbing company specializing in installing home septic systems. The business had no physical assets, but had plenty of goodwill and a history business providing good service in the Cincinnati area for twenty four years. Jerry purchased the company from his mother, sold the equipment of Stewart Plumbing Company and in two weeks and ordered a new pumper truck.

The new truck arrived in four weeks and in September 15, 1980, and the company began providing service again under the Ace Sanitation Service name to appeal to commercial and industrial customers.

Continued growth for the company encouraged Jerry to purchase a 7000 square foot building. The people who provided continued quality service were the driving force behind continued growth of 20%-30% annually for the company. Recognizing each person’s abilities and paying that person accordingly has been and will continue to be vital to this company.

Ace Sanitation Service celebrated its 50th Year of providing reasonably priced good service to our customers. Our name ACE stands for the right Attitude toward our customers, Commitment to serve our customers, and Excellence in knowledge and training, vital to any business. 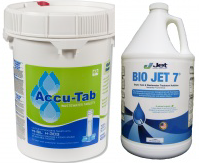